Twin Creeks Transit Oriented Development became a reality in early 2001 when the Central Point City Council adopted the Master Plan for this 200+ acres Master Planned Community. After several years of acquiring property, planning began in earnest in the summer of 1999. The planning process for Twin Creeks was very inclusive, involving the surrounding community, city government, utility companies, and many other government agencies and districts. The culmination of this unusual and extraordinary effort was the adoption of an award winning Master Plan which has guided the development of this unique community.

Twin Creeks and the City of Central Point have been presented an Ahwahnee Award, sponsored by the Local Government Commission (www.lgc.org), for their master planning efforts in Twin Creeks. The Twin Creeks plan provides for many community benefits not ordinarily seen. Some of these are:

Natural Features: Griffin and Jackson Creeks flow through the property. Both creeks have been rerouted and restored to more natural channel configurations, including trees, shrub, and grass plantings.

Storm Water Treatment: Bioswales and constructed wetlands have been used to treat and detain storm water before it is released into the creeks.

Parks and Open Space: Nearly one-quarter of the project site is dedicated to parks and open space. These spaces range from developed park areas to natural creek corridors. These areas are developed as each neighborhood is constructed.

Commercial and Service: Twin Creeks has at its hub an area which will have mixed-uses, high density housing inter-mixed with medical, professional, and possible retail or restaurant. 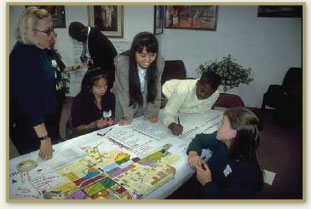